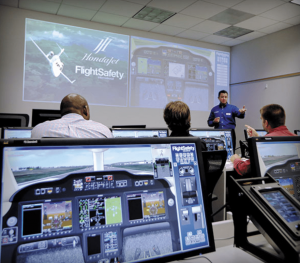 Startup company “Jet It” is not your typical fractional. Founded by aviators for aviators, Jet It seeks to alleviate the expenses related to jet ownership by allowing as little as two and up to 10 owners to collectively purchase and utilize a new HondaJet from its developing fleet. The ability to share the acquisition and maintenance expenses of a jet is a value proposition the company is offering to frequent travelers and owner pilots alike.

“While selling for Honda Aircraft Company, we frequently came across pilots who were ready and willing to step up to a jet but could not justify the cost of whole aircraft ownership,” said Gonzales, CEO of Jet It. “We created Jet It as a response to what the market was asking for – the benefits of jet ownership at a much more affordable price point.”

Following the acquisition cost (starting at $600,000), Jet It members are charged a flat rate of $1,600 per flight hour in addition to a monthly management fee which covers items such as maintenance, management and pilots (the larger the share size, the lower the fixed expenses). Unique to other fractional programs, Jet It allots members a set number of days versus hours for the year where each shareholder is entitled to the same amount of days as defined by their share size. The minimum flight time requirement is 30 minutes, and there is no limit to how many hours the aircraft can be flown per day.

When asked why the pair selected the HondaJet as its launch product, Gonzales spoke to the aircraft’s efficiency, speed and space. “My co-founder and I were at Gulfstream before our time with Honda, and we found the HondaJet to have legroom relatable to a $20 million G280. From a speed standpoint, the HondaJet is equivalent to Citation CJ3, and its efficiency equivalent to a King Air C90. It is such an interesting aircraft with performance and amenities that exceed other aircraft in its class.

Initially, Jet It will maintain a fleet of 10 to 12 HondaJets stationed around the eastern United States. Those who live within a 30-minute position of one of the aircraft can become a shareholder. The company anticipates rapid expansion to the western U.S. along with operators in Canada, Mexico and southeast Asia.

“The response has been overwhelmingly positive, and things are moving forward very quickly,” said Gonzales. “My partner and co-founder Vishal is establishing our international operations as we speak which is something quite unique. In the future, owners traveling near our international partners will be able to fly and operate one of our HondaJets at the same price point they are familiar with in the U.S. We have begun this effort in southeast Asia where the company will be known as JetClub.”

Currently, Jet It is seeing an even split in travelers (back seaters) and owner pilots interested in the program. By the time of this article’s publication, the company expects its first three aircraft to be in operation. The first unit is now purchased with 40 percent of the aircraft belonging to pilots.

“We are the first fractional organization to place owners in the cockpit of a new jet,” said Gonzales. “These are individuals well aware of their travel patterns. Oftentimes, they are small business owners who simply need more range or reach than their current aircraft allows. Whatever the case, we can customize their ownership to meet their qualifications and needs.”

Requirements for Jet It owner-pilots include maintaining a medical and completing training, PIC or SIC, either at FlightSafety in Greensboro (simulator) or in the aircraft itself (any location). Once qualified, owner-pilots can then plan, fly and operate missions to whatever extent they wish. Each flight, they will be joined by one of Jet It’s professional pilots which allows for unique flexibility.

The completion of HondaJet training will also earn owner-pilots the status of membership in the “Red Jet Squadron.” This is a name developed by Gonzales and Hiremath as a way to establish community and camaraderie among Jet It and Jet Club owner-pilots. The idea was influenced both by Gonzales’ time as a fighter pilot in the Air Force as well as Hiremath’s experience within various flying clubs.

When asked what success would look like one year from now Gonzales replied, “When quantifying it, we would like to see a dozen airplanes throughout the eastern half of the U.S. with operations established in Canada and Asia as well. But the most important measurement of success to us is that we have happy owners who are receiving the service they asked for.”