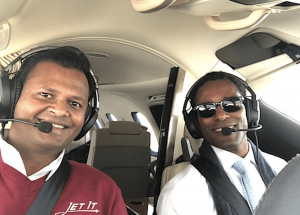 A year ago, two former Honda Aircraft (NYSE: HMC) executives took flight on a bold venture to start a company offering light jet fractional ownership to companies and individuals who can benefit from private aviation without the burdens of owning an entire plane.

On Dec. 21, 2018, partners Glenn Gonzales and Vishal Hiremath purchased their first HondaJet Elite from their former employer, and Jet It was cleared for takeoff.

Almost one year to the day, Jet It took delivery of its sixth HondaJet Elite at Honda Aircraft’s Piedmont Triad International Airport facility, the keys personally handed to the partners by President and CEO — and their former boss — Michimasa Fujino. 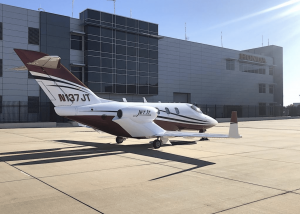 The latest acquisition makes the company, for now, owner of the largest fleet of HondaJets in the world.

“We’re pretty excited about that considering we just started a year ago,” Hiremath told Triad Business Journal of the company’s fast but steady growth. “Things are moving pretty quickly.”

With growth ambitions for its fractional ownership model in the United States, and a planned fall 2020 introduction of JetClub for international markets, Jet It will be in the market for many more HondaJets. 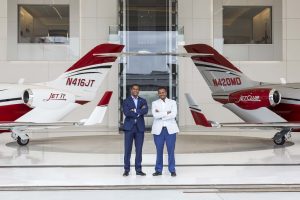 Gonzales serves as CEO and Hiremath as president of Jet It. Both are licensed pilots — Gonzales flew F15 fighter jets in the U.S. Air Force, retiring as a Lt. Colonel, and Hiremath has 16 years of experience in private and business aviation.

The company employs 23, including support staff and pilots. Five, including the partners, work in the cramped downtown Greensboro headquarters with about 400 square feet in the 101 South Elm building. In the first quarter of 2020, it plans to move within the building into 1,800 to 2,600 square feet with enough space to accommodate 20.

That growth is reflective of the growing fractional ownership mode, which provides a viable private aviation option to occasional users. Fractions from one-tenth to one-half of an aircraft are available. Access to the plane is proportionate to the percentage of ownership. At a cost of about $5 million for a HondaJet Elite, minimum buy-in is approximately $500,000 and maximum is $2.5 million.

Three of the fleet are pre-owned, the remainder custom orders from Honda Aircraft. Two of the planes are locally owned.

“It’s a tremendous aircraft, which in large part is why Vishal and I elected to go with the HondaJet,” Gonzales told TBJ. “Obviously it’s great that it’s located here. It’s a wonderful brand behind the name, but having worked for the company and having experienced the airplane, it’s just unmatched in its category.”

Gonzales said the HondaJet’s efficiency is attractive to its owners with low fixed, shared monthly expenses and a cost of $1,600 an hour to fly, which he said is about two to three times less than competitors in the space. The planes hold up to five passengers and two crew.

Jet It takes no markup on the capital investment of its fractional owners. It makes money when the planes are not in use by offering them in the on-demand market. Unlike some competitors, the company does not charge for concierge services such as arranging hotel and restaurant reservations or securing sports and entertainment tickets.

“One of the things that we do that is very different is, it’s your airplane for the day. You are allocated the number of days according to your share size,” said Gonzales. “You’re not restricted to the number of hours that you can fly, so a business owner can now travel to meet with a supplier in one city, they can then travel to meet with a customer in another city and then make it back home for their child’s ballet or soccer match.” 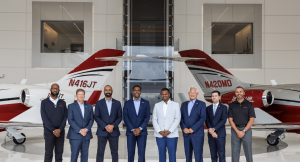 Fractional ownership is the first phase of the Jet It business model. Hiremath is leading the company’s effort to launch JetClub, not too unlike boat clubs that are gaining popularity throughout the U.S. In exchange for membership dues, club members will have access to HondaJets in markets outside the U.S., where fractional ownership is nonviable due to varying regulations in different countries.

JetClub marketing has already begun. “We want to start in Southeast Asia because the market is there and there is a lot of demand,” said Hiremath, adding that the region is an underserved market. “There is fast economic growth but not much private aviation infrastructure available. We want to be one of the early disruptors in that market space, so we were looking at Southeast Asia and India, then we’re looking at Eastern Asia. We’re also studying Europe, which is a more mature market.”

JetClub will also offer members access to Jet It’s U.S.-based fleet. Business travelers can fly into the country on commercial aircraft, then pick up a Jet It plane to continue their journey. Conversely, fractional owners in the U.S. will have access to JetClub planes elsewhere.

As with its initial phase, JetClub growth will be gradual and deliberate. “Right now we want to make sure that we grow and make every customer happy,” said Gonzales. “We flew well over 2,000 hours last year in our fleet of aircraft. The market will decide how big we can be. We have goals and vision. We recognize there’s a grand opportunity there, but right now it’s to succeed one fight at a time.”

Among those successes is a relationship with ESPN fantasy football analyst Matthew Berry, a proponent of Jet It. The company has teamed with Berry for a contest to award randomly selected viewers weekly prizes if they share a memorable travel experience by tweeting to @Gojetit_ using the hashtag #JetitContest. The grand prize is a free private flight on a HondaJet Elite.

With most marketing to date word-of-mouth, the contest is intended to elevate consumer awareness of Jet It.

“Essentially it’s education and brand awareness, and it’s talking to the broader segment of the market to make sure that they’re aware that private aviation can be accessible, especially at our level,” said Gonzales. “The response has been incredible.”

Although its product will take owners and members around the world, the partners say Jet It’s base of operations will remain in the Triad.

“We hope to take Greensboro everywhere through HondaJet and though JetClub,” Gonzales said. “We’re excited about the countries that we’ve had a chance to visit like The Bahamas, The Caymans, Canada, Mexico and Costa Rica, but there’s so much more that we think we can do with JetClub. It is an underserved market in different ways, both domestically as well as internationally, and we hope to fulfill the opportunity.”