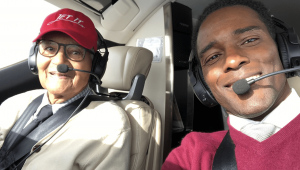 When Jet It founder and CEO Glenn Gonzales found out that Tuskegee Airman Col. Charles E. McGee was about to celebrate his 99th birthday, he jumped at the opportunity to do something special for the war hero. A former Air Force pilot himself, Gonzales invited McGee to take a flight in Honda Aircraft’s HA-420 HondaJet. It would be the first time the fighter pilot took the controls of an airplane in 37 years and the smile on his face clearly illustrated his excitement.

Colonel McGee is the only known fighter pilot who flew more than 100 combat missions in each of the following wars: World War II, the Korean War and the Vietnam War. He served in active duty for 30 years, flying more than 6,300 hours, and in 1972 he became the first black commander of a stateside Air Force Wing as the commander of the Richard-Gebaur Air Reserve Base in Missouri. In addition to the P-51s that the Tuskegee Airmen became known for mastering, McGee flew the Bell P-39 Airacobra, Republic P-47 Thunderbolt, North American B-25 Mitchell, Lockheed F-80 Shooting Star, Northrop F-89 Scorpion and McDonnell RF-4.

Gonzales started Jet It, a fractional HondaJet ownership business, with Vishal Hiremath, who he worked with at Honda Aircraft and Gulfstream. Jet It has operated leased HondaJets since its launch earlier this year. On December 21, the Greensboro, North Carolina-based company will take delivery of its first HA-420. Gonzales said the fractional ownership slots for this airplane are already almost sold out. As of now, the company is only planning on offering the HA-420 platform. Pricing starts at $4,000 per month for a 1/10 share with a $1,600 fee per hour.

While Jet It only started this year, it has already branched out with an international offshoot called Jet Club, which has clients in Canada and Singapore.